Ballot Measure to which this in depth article is connected:
Proposition 47: Criminal Sentences. Misdemeanor Penalties 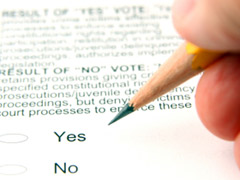 In November of 2014, Californians voted to pass Proposition 47 - a measure that reclassified some nonviolent felony crimes to misdemeanors.

Prop 47 also allowed current prisoners to petition judges to reduce their sentences based on the new reclassification of their crimes.The expected savings from incarcerating less people was estimated by the Legislative Analyst’s Office to be up to $200 million annually. These savings were designed to be invested in mental health programs, drug treatment, early education and other infrastructure.

With a few months of implementation underway in California, there are many perspectives about the impact of Prop. 47.

There have even been changes to Prop. 47 proposed by the California Legislature this year.  If any of these proposed changes in the form of Senate or Assembly bills are passed and signed by the governor, they would require a majority affirmative vote by the voters to amend Prop. 47.

Here are a few resources and perspectives about the implementation of Prop. 47 in California:

Registering to VOTE is easy and Online